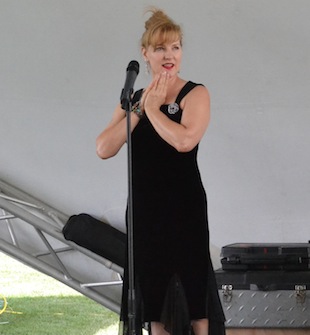 Dramatic Soprano Carrie Landsgaard began her musical studies on flute in elementary school, at age 10.  She continued on her artistic path with a B.A. in Theatre, worked as a jazz vocalist, and released an album in 2005 that was chosen by Singer and Musician magazine as one of their “top 50 Indie Pics” .   A chance meeting with Rose Kingsley (Artistic Director for the International Opera Institute – formerly @The Met, Houston Grand Opera) sent her into a whole new direction for the next 3 ½ years, studying with Ms. Kingsley, and other highly respected professionals in the Opera field.  She has coached with Maestro Bill Vendice, and Maestro Gregory Buchalter.   She had the opportunity to sing for Maestro Vincent LaSelva – Artistic Director for New York Grand Opera, and in the Verismo Opera Competition in New York in the Fall of 2013. (for Lucine Amara).  She has performed under Maestro Valery Rivkin, and with Pacific Lyric Opera, Artistic Director – Carlos Oliva, who may be contacted as a reference, as well.

Carrie just sang a principal role in the West Coast Premiere of “Apollo 14” in November 2013, at the Palm Springs Air Museum. Apollo 14 premiered in New York City to rave reviews, and in the West Coast premiere featured an appearance by astronaut Ed Mitchell.

Carrie also has some television and independent films to her credit, as well as a leading role (the one with the gun!) for Unsolved Mysteries in “The Thelma and Louise bandits” segment, and more recently on “America’s Most Wanted”.