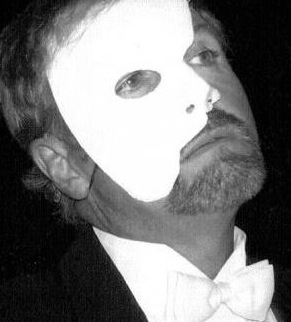 Tom Mayer, a ‘Bari-Tenor”, and native of southern California, has been  performing from his early childhood.  He has a wide vocal range with the ability to sing Baritone thru Tenor. He has a Bachelor’s Degree in Theatre and Vocal Performance.

Mr. Mayer’s performances include, The Whittier La Mirada Musical Theatre Assocation, The Long Beach Symphony, Master Chorale of Orange County, and Disneyland.  He is best known for his role of ‘Phantom’ in Andrew Lloyd Weber’s ‘Phantom of The Opera’, which he has performed all throughout California and Las Vegas.

His other performances have included:

Camelot, South Pacific, Threepenny Opera, Anything Goes, The Merry Widow, and Pajama Game. In 2008, Mr. Mayer was nominated by The Desert Theatre Guild for Best Male Performer in his one man show. In his show he displayed vocal versatility with a program of music including Pop, R&B, Folk, Country, Broadway and of course Opera.

Tom is currently performing with The Desert Opera where he will be playing ‘Marcello’ in the Desert Opera’s fall production of “La Boheme” at The Indian Wells Theatre in Palm Desert.